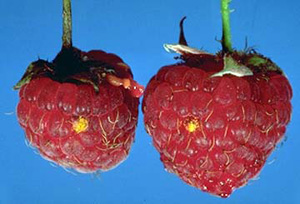 The leaf rust is a severe disease that affects the petioles, leaves and the fruit. It usually appears late in the season of raspberries, and you may face economic losses from premature defoliation and fruit infection.

However, a fungicide like Sonata will help you fight this dreadful disease. It has an active ingredient Bacillus pumilus strain QST 2808 that prevents the development of fungal spores on raspberries.

These signs of Late Leaf Rust disease will make it hard to sale as they will appear unattractive and unacceptable for fresh market sales. The good news is that there are fungicides on the market to help you control the effects of these dreadful fruit disease. The following are the best fungicides for suppression or prevention.

I believe this is the best fungicide that can handle from moderate to severe disease pressure efficiently and will usually combat leaf rust disease during the peak season of raspberries. Apart from that, the fungicide improves performance and reduces spray intervals.

For Sonata to be compelling, consider applying before the development of the disease and repeat the same process between (7-14) day intervals. Also, this fungicide offers flexibility to the user as you can still apply to the fruit even on the day of harvest.

This organic copper fungicide can be a great alternative if other fungicides can’t handle the late leaf rust disease efficiently. It has two active ingredients; copper octanoate (also known as the copper soap) that has been widely used to control range of both bacterial and fungal diseases affecting plants including late leaf rust disease. The presence of low concentrations of copper makes the result useful.

Though this copper fungicide could eliminate beneficial organisms, you can later use FA-O+7 for re-establishment of these organisms. The advantage is that they are certified for crop production as they can control the spread of late leaf rust disease in raspberries.

After successfully fighting the dreadful condition, you can now work to re-build the essential organisms on the surface of the leaves of your fruits.

For useful results, consider applying at the start of the flowering to the harvesting season for every 7 to 10 days continuously. You are not to use more than 63.5 gallons of the fungicide for every acre per year.