This blog post is a reflection on my experience with the first, and potentially most important step in proper planting practice; stock selection. It’s true that one ought not look a gift horse in the mouth, but when you are paying good money for a tree that you want to last a lifetime, scrutinize it! Make sure that the tree doesn’t have any existing conditions which could impair its ability to become established in your landscape and live a long and happy life. In general, nurseries do a very good job at keeping healthy plant stock in inventory. However, in my opinion there is one primary challenge that stands out with many commercially available plants, and that is root damage and/or poor root development in early life. The foliage and branch structure of your tree is easy to see, but challenges of the root variety can be easy to overlook unless you undress the ball and make the effort to select your stock with care.

The most easily recognizable example of this is a plant that has lived longer than it should have in a pot and ended up “rootbound”, ie- since the roots had nowhere to grow, they ultimately start running round and round inside the pot. This is problematic for two reasons: first, the plant upon being dropped into native soil may continue the bad growth habits established in it’s youth and strangle itself in time with it’s own roots. Second, if the plant avoids choking (or “girdling”)  itself to death, it’s roots may still be impaired enough that they are unable to run and spread from the radicle throughout the lifetime of the plant to the extent that they should, resulting in a smaller active root zone and less water and nutrition available to the plant in the long term. Larger trees that are field dug or taken from a lot “ball & burlapped” may have root damage from the process of digging them from their nursery fields.

When tree seeds such as acorns, beech nuts, etc. land on the ground and successfully germinate out in the forest, they never move from that piece of earth where their life began. The variety and degree of challenges that they will face throughout the course of their tenure in the forest is extensive, but they will likely never have to deal with the stress of a transplant. The takeaway here is that any root manipulation whatsoever leaves your tree at a deficit from the word “go”. A certain degree of imperfection is unavoidable due to the fact that we need commercially available stock for our projects, especially when we are in need of rarer cultivars and selections may be limited. Sometimes we just have to make the best of what’s available, but are you doing your due diligence in stock selection to make sure that your plantings will be as vigorous, resilient and successful as possible?

When I go to the nursery or greenhouse to buy plant stock, I am actively removing every specimen from it’s container to look at the roots. I even do this with starter plants like peppers and flowers for the garden!  With larger trees, burlap gets folded back, cages loosed, and I want to see the root ball. Good nurseries will let you do this, because you should be able to inspect what you’re buying, but take care to be respectful and avoid damaging anything in the process. Ask for help if you are unsure. My father taught me most of what I know about inspecting stock, but throughout all of my years planting trees with him, one rule has held true above the rest: plant small.

The general theory behind planting as small/young of a specimen as possible is that the plant will have had less time to establish bad habits. Smaller stock will be less likely to have been potted up or transplanted one or multiple times. Younger stock will have had less time to establish girdling growth patterns, and it will have a lower probability of having undergone significant root cutting or caging. Smaller stock is often healthier, more maneuverable, and requires less manipulation when planting- don’t break your back! “But my client wants a mature privacy border- yesterday!” Well then it’s time for a short term pain vs. long term gain kind of conversation, because they wont be so happy in 3-5 years when it is time to pay for the expensive install again because the 30 large Green Giant Arborvitae that you planted in their cages failed (not to mention you installed a monoculture, but that’s a different blog…).

For now let’s take a look at a tree that I planted this October. I have been slowly working on establishing a wetland habitat area on our business property over the last few years, and one of my long term visions for the site was a dominant Bald cypress (Taxodium distichum) right next to the standing water. The Bald cypress is a deciduous conifer native to the southeastern United States. These trees are fairly hardy, so I should be able to get one established well in my good soil, but since they aren’t native to the area the commercial selection in my northern neck of the woods can be somewhat slim. Regardless, I was determined, because the Bald cypress is known for one specific trait that I was after: when these trees become established in swampy habitat, they have the tendency to raise their roots above the water like knees, giving the appearance that they are creeping and reaching through the swamp when water levels drop. This unique and super cool aesthetic is what I am after for this corner of my pond, and it’s a bit of an experiment, so the establishment of good root run and development is pivotal if my long term vision will ever be realized.

It should again be noted that the Bald cypress is not a common tree around here and so my selection was limited. I could only find a handful of specimens within an hour drive of my location, so I went and took a look at them all. I ended up lifting every tree out of its container to inspect the roots before I made my selection, and what I found was not all that ideal. That having been said, the foliage and branch structure is beautiful and it is a nice tree.

Although the root flare and the top of the ball on this tree looked alright, the rest of the ball was definitely pot bound. This tree was riding the line on whether or not I wanted to deal with it, but the deciding factor for me was that the majority of the bound and circling roots were still fleshy and fibrous enough to be teased out without requiring too much major manipulation or cutting. Once the roots are large enough that they become more woody, they establish memory, and more invasive surgery is required to correct their habits before planting. The more invasive we have to be with our root manipulation, the more stress we incur on the organism during the transplant, and the probability of failure increases. The key here is to have an intuitive understanding of how much manipulation is too much. 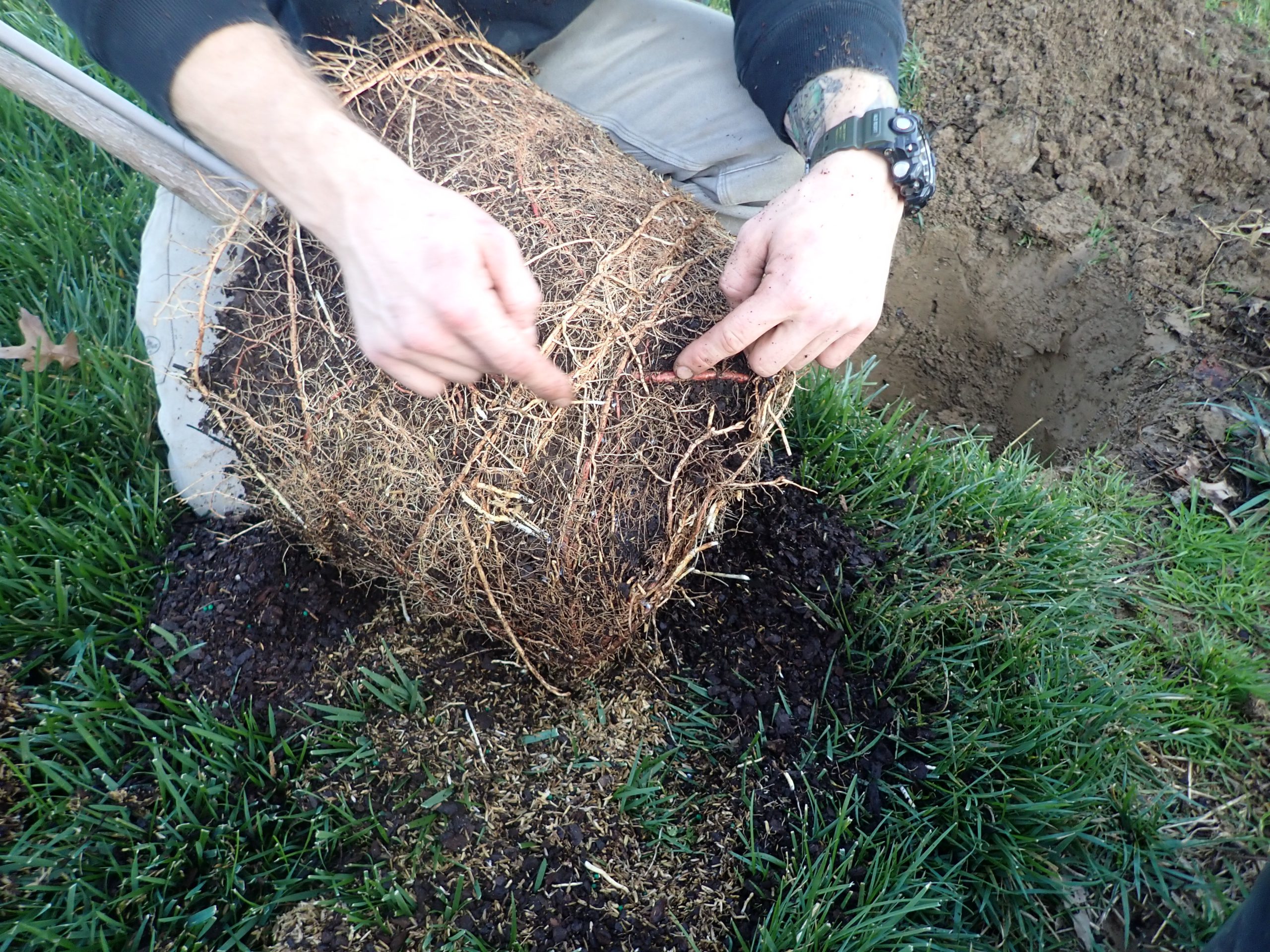 I did end up teasing a lot of roots out to open up the ball on this tree, and in doing so I definitely hurt it a little bit. Just like any patient that undergoes surgery, I wanted to provide my tree with the correct biology and nutrition to get it healing and back on its feet as quickly as possible. I personally never do any planting without mycorrhizae. The symbiotic relationship between mycorrhizal fungi and tree roots is invaluable in the transplanting process, especially when you have to stress the tree with more manipulation than you would like. I use our Hyphalink EETP transplant packs for most jobs, as they are conveniently sized and a little bit goes a long way. Mycorrhizal spores need root contact to become established and survive, so I like to throw a few small handfuls of this product directly in around the ball as I backfill with my native soil in lifts. 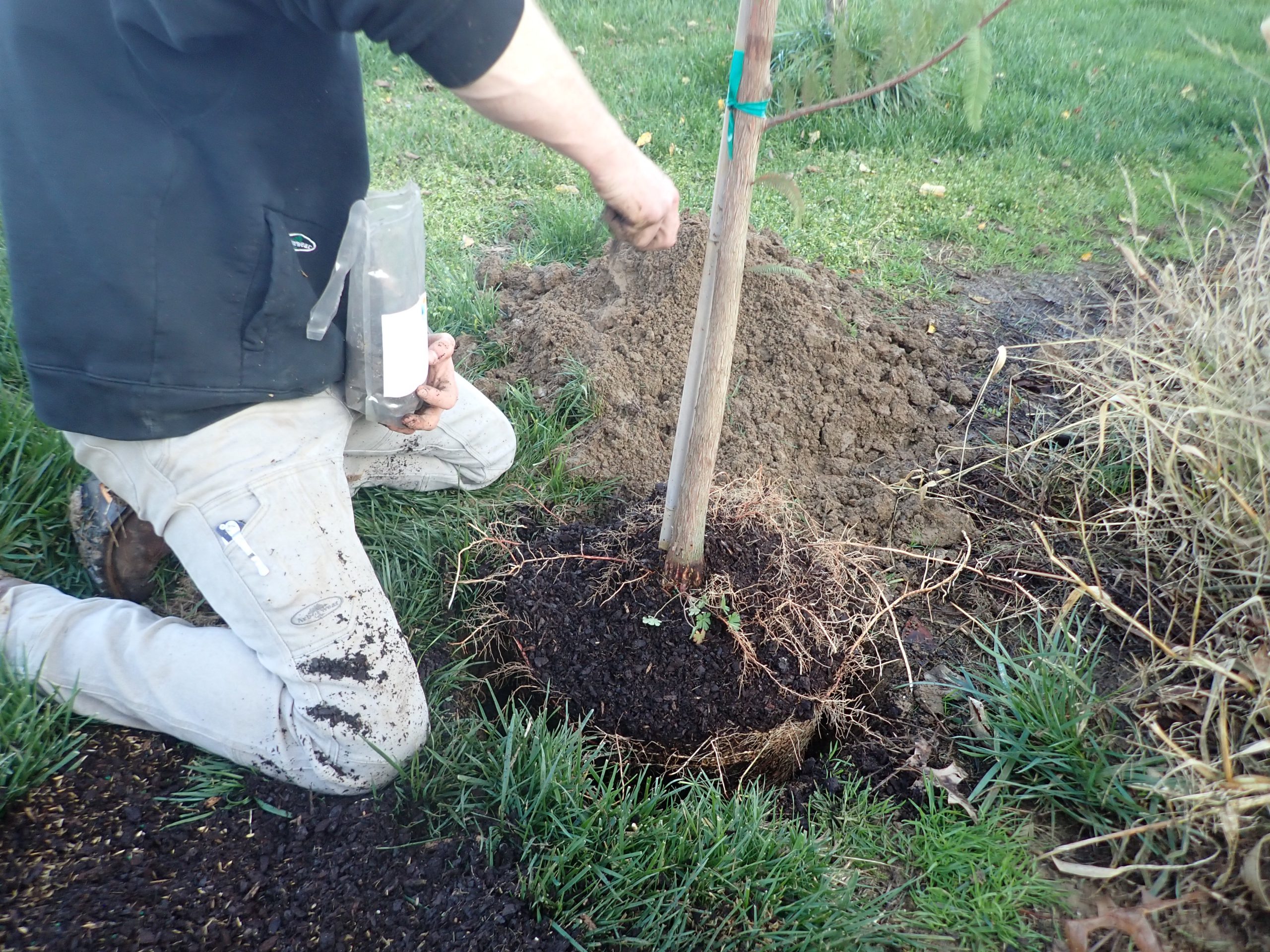 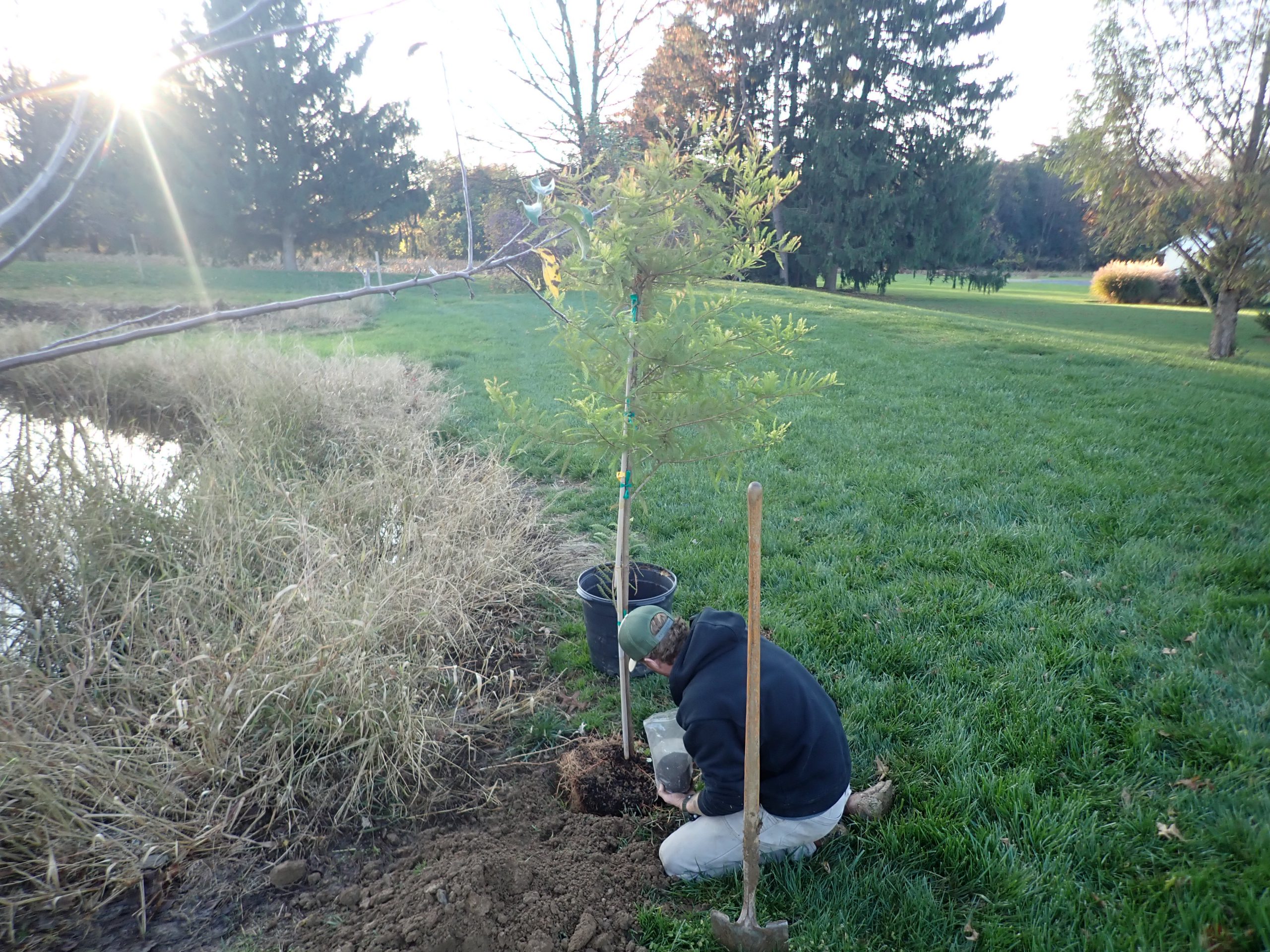 After my tree was in the ground, I returned a few days later to soil inject it with my deep root feed cocktail, aka my secret sauce. This mixture contains Influence, LC10 + 7, and Fish (and a few other things..). The humic acids in this mix ensure that the macro and micro nutrients won’t leech, so they will be available to the tree in the spring even though I injected it in October. The influence will help establish beneficial biological antagonism in the soil to hopefully outcompete any pathogens that want to invade my injured roots in the short term, while simultaneously reducing transplant stress to the tree. Sometimes as arborists, nurserymen, gardeners and homeowners we have to hack things up to get the job done. The trick to sustainable planting is to minimize stress as much as possible every step of the way. I really love getting my hands in the dirt and planting trees. Planting is one of the real pleasures of the job that actually makes me feel like I am giving back to my planet, my home. Planting this Bald cypress was especially enjoyable for me, and I hope that I did right by it so that my family will be able to enjoy its presence for a long time to come. Thanks for reading! 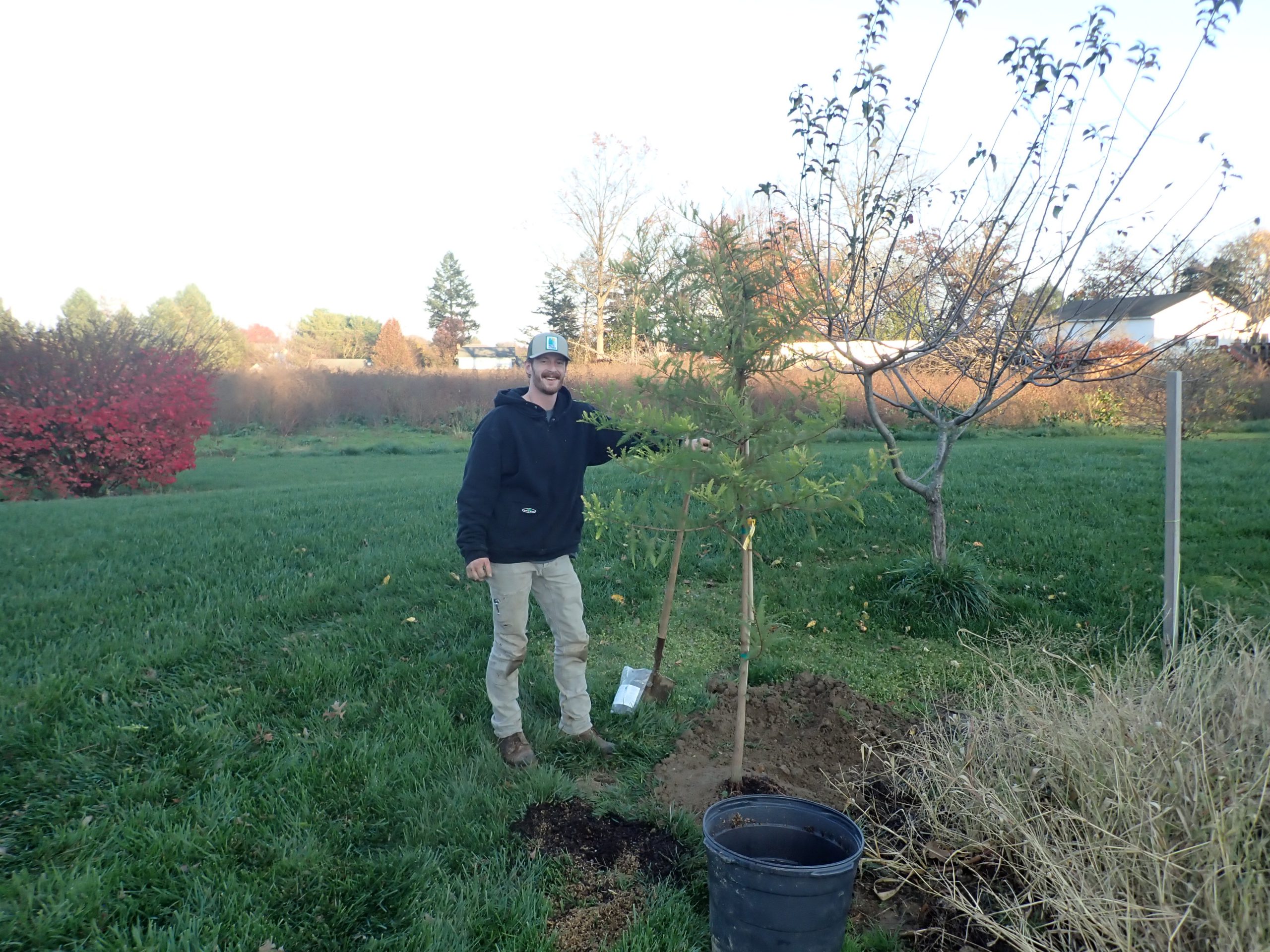 A Bundle of Sticks

Bacterial Leaf Scorch – there is no Silver Bullet…